Unfortunately, I was unable to make a screenshot of this game.

The game starts with a cool fire shader and an intro story explaining the plot. It was impossible to skip the intro which was somewhat annoying. However on the next run of the game the intro is skipped entirely. You move a couple of skulls around and try to collect more skulls. As you collect skulls by moving onto graves your line of skulls get longer. There is a minimap over where stuff can be found, and there you can also see some dark shadows that hover around and collect skulls as well. Sometimes a figure looking like a fool appears, I was uncertain if I was supposed to collect him or not. As you move around your skulls shrink starting from the back of your line of skulls - when the last skull has shrunk you die. The minimap is a little confusing as it is not aligned with the direction you are moving. Sometimes I died without knowing what happened. The music sounds like something from a spaghetti western movie, and the sound of collecting skulls sounds like a cartoon voice? I don't think either of those things fit the game. The frame rate is very good and the graphics are very glass and crystal like with lots of stars and reflections - that was what I liked best about the game. The text showing your score and the icons could also use some work. I got a little dizzy playing the game after a while. The game was not very original or entertaining for long, it needs more variety and better feedback to the player about what the goals are. 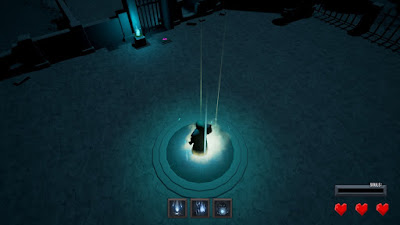 When starting the game, it complained about a missing substance plugin. Luckily that warning could safely be ignored. The game starts with a very good looking intro, however buttons and text looks bad. Also there are options for entering an ip address and port, but who knows what it's for. Multiplayer? I have no server address so who knows. There are no settings or instructions. I start the game, and play as a wizard that moves around using WASD. I can also kick. There are spell icons but I was unable to choose any of them, even trying every key on my keyboard. I press space and hear a sound but nothing happens. I can go over to a button and press it to open a door, and zombies appear outside. A couple of hits and I am dead. I restart the game and manage to run, avoiding zombies, to the next area. I can light a fire using the left mouse button. I can step on a switch to open a door, but it closes before I am able to reach it. After trying to figure out what to do for several minutes, I have to give up. I guess this is a puzzle game of some sort them. Seems like I am missing some part of the puzzle? It's a shame for the game looks very good and the sound and music is good as well. I will revisit this game if I get some hints on what to do. :-) Oh, and I think some debug options was left on on the final build on the game because I can see hit boxes...

Something Fun - Shadow Raider of Ruins 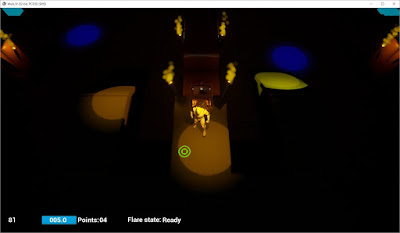 I had to do a search to find out what this game was called. Maybe put it in the start menu? The game has a nice tutorial. I also like the level select very much where you move your character into the level you want to play. You guide your character around in an urban-like 3d environment to find treasure chests. You have to avoid the spotlights or you die. The lights move around randomly but if they get close they start to chase you. You can go invisible for limited amounts of time to avoid the lights. The graphics are simple but clear. The special effects look good. Part of the challenge is to find out how to get to the chests in the dark environment. I don't think the treasure chests fit with the rest of the graphics however, maybe something more modern would be in order, like a safe? The sound and music is OK, but the gameplay was more fun than I'd like to admit, as it is a quite simple idea. The game had a very good.... feel, mood... whatever you want to call it - that made me want to explore more and continue playing. I can really see this as a successful mobile game. 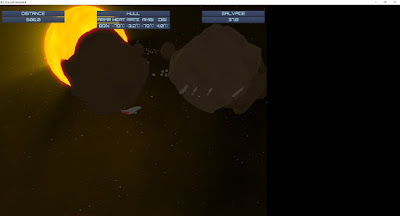 You navigate a starship towards the sun collecting salvage in the form of small barrels, but you have to keep in the shadows of asteroids to avoid overheating. Don't get too close to asteroid or other space junk though, as you will crash! At first I had a really hard time controlling the ship, and the camera flew all over the place, but after a while I got the hang of it and it got a lot more entertaining. The graphics are good, I especially like the sun ray effect. It was a little hard to know if I was in the shadows of asteroids or not, that should have been more clear - maybe light up the ship in red when hit by the suns rays, or darken the ship a bit while in the shadows? Sometimes I overheated very quickly and died at times I was certain I was in safety. The sounds are good and space-y and creates the right mood. There is no music but I think that fits the game well. Also the menu screen font is good and fits well with the rest. A can easily see this game evolving into something more with a bit of a story and different types of quests. 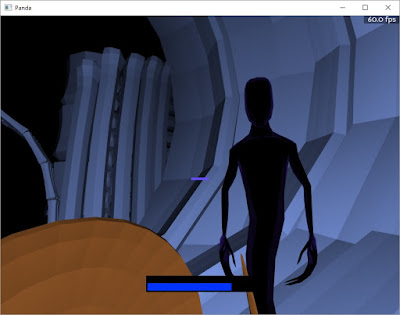 It is a first person slasher where you walk around in something looking like a collection of bones killing shadows with a knife. You can also block attacks with a shield. You can also turn the light up and down - when the light is down you heal, but then the enemies are stronger - as if they were not strong enough in the light! You walk around in something looking like a skeleton world. There you meet some dark apparitions, different shadows, some attack you close up, others shoot balls at you. You can locate shadows by listening to where they are as they moan a lot, which is helpful. The game is quite hard, I usually died within seconds - the shadows were just so much better at hitting me than I was at hitting them, and if I tried to run I was quickly overwhelmed by the sheer amount of shadows that appeared. I could block but then I could not move, and when I attacked after blocking the shadows had lined up to kill me. I played several times but did not seem to get better at it. There is no music, but an eerie background sound with some moaning and something that sounds like wind. The graphics are simple polygonal but works well. The game was mildly entertaining for a while, and had little variety and depth. Maybe a ranged weapon in addition would help, or different types of attack?

Unicore - The Awakening of Prometheus 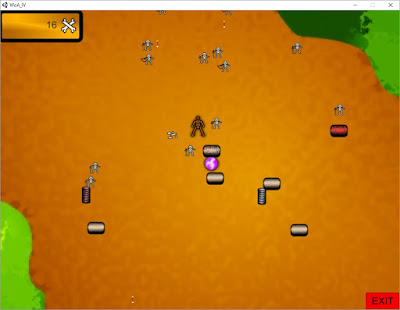 You are Prometheus, a titan, and the Vrykolakas are coming! You move around and rearrange and rebuild a temple to keep the baddies out. You move blocks around, and you can also 'evolve' blocks to better versions. This is all explained in the intro but it is impossible to remember. Luckily there is a supplied 'cheat sheet' .png image that explains the evolutions. Good thing I have multiple screens so I can keep it up at all times. But first you have to kill some skeletons and collect their bones, as this is the currency in the game. The evolved ruins have different properties, like it can generate more bones or shoot missiles at enemies. I like the combination of moving a character around and the city building. However, the character moves too slowly, and the skeletons become too numerous too quickly, so I quickly died time after time before I managed to evolve much. If anyone can offer a strategy I am all ears... I would love to see the evolved ruins in action. The sound of the game seemed very loud! I had to turn my speakers down for this game. The music sounds like a mixture of greek music and country and western? The sounds were very simple, 8-bit like. There was no movement animation, and the different tiles looked very simple, and it was hard to remember which were which and what they did in the thick of it all. It was a nice touch with the death screen (that I saw all too often...) It was a little annoying that the intro showed each time I started a new game.