Half the fun of Week of Awesome is playing the other participants games. I know how much I enjoy reading about others experiences playing my games, so that's what I will be doing now for YOU, offering my opinions on graphics, sound and gameplay. I will try to be as honest as I can - I hope I don't offend anyone! I try to be constructive in my criticism. Also remember, all praise also comes straight from the heart!

I am not an official judge in the competition, so I will not hand out scores. I will try to include screenshots of every entry if that is doable without too much hassle. (I.e. 'Print Screen' works).

So - on with the reviews!

After a rather huge download of 800MB, I'm finally ready to review this game. 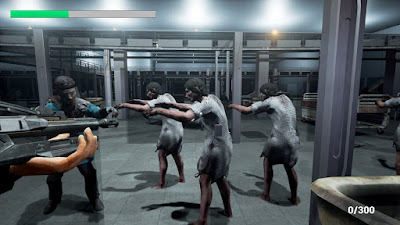 At first, I'm going 'WOW' - the graphics look great! It is a first person shooter. The main character and animations look very good. I start playing, and it is kind of hard to navigate as it is difficult to tell the difference between a glass wall and a walkway. The zombies seem invulnerable, I did not manage to kill a single zombie even if I emptied my magazine in the zombies heads and several restarts. The zombies killed me easy peasy however - but there is no feedback when the zombie hits, except the health bar decreases. The zombies seek you out, but the motion is very jerky. There is two kinds of zombies - patients and doctors? No discernable difference between them except different graphics. The area you play in may be a prison or a hospital. When I died I found no way to restart the level short of exiting the game using ALT-F4. The menu screen is cool. The sounds are also good, however after a while you get tired of the zombies repeating the same sound over and over.

A game with good potential, but it seems kind of buggy at the moment. 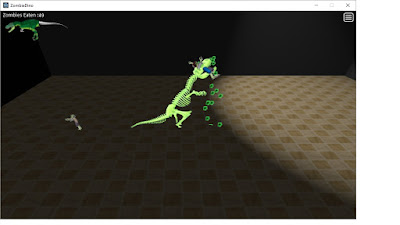 The game starts with a good looking 16-bit retro intro telling the back story of a magic super-t-rex that has to eat flesh to survive and to regenerate its flesh. Click zombies to approach and eat them, to regenerate some of your flesh.

You go from room to room and eat zombies. You can kick doors and headbutt boulders that are in your way. Sometimes there appears a policeman that will shoot at you so some of your flesh will disappear. You seem kind of invulnerable to the zombies, they only play the role as food. It is a nice effect that you can see the dinosaurs skeleton if it is in the dark. It is also nice that you can see the flesh progressively cover the dinosaurs skeleton. However if you stand around doing nothing, nothing happens. Also there is no real challenge - zombies are completely harmless and the policeman is weak and quite easy to neutralize. I ate over 70 zombies and were never close to dying. When you get shot by the policemen it takes a while before this is reflected on your pawn so it's hard to know the amount of life you have at some points. I got stuck in walls and other objects and the graphics were a bit jerky at times. The music was all right, nothing special, but not bad. The sounds were a little crude. Graphics were okay, especially the dino and the wall decorations looked good, the rest was so-so.

I had some problems starting the game at first as there were no instructions, but after a 'java -jar runic.jar' I was good to go! 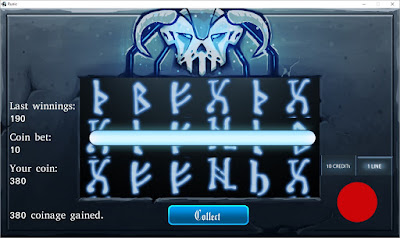 The game is essentially a slot machine with runes and cool music. Choose how much money you want to bet, choose number of lines and push the big red button. Repeat. The background graphics looks great, the collect button and the big red 'start' button looks kind of out of place. I think there are 3 different fonts in the menu screen - maybe a bit much. I think the runes don't look distinct enough, maybe there should have been different colors to easier see the difference between them. Also, the gameplay is a little lacking - depending on if you like slot machines or not. 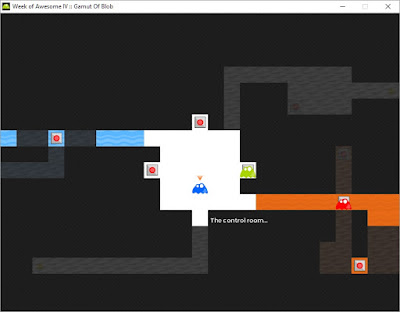 It is a light puzzle game with some narration. You steer blobs around small mazes and solve puzzles. You can pick up genes to get new blobs with special abilities to help solve the level - you switch between the blobs with the spacebar. Red blobs move in red areas, blue in blue etc. You turn on light switches to open up new areas of the maze. If you leave a blob in the dark it is paralyzed and can't move! The puzzle difficulty ramps up nicely between the levels. Not too original but enjoyable. Great instrumental/vocal mood music, and different music for different levels. Lovable characters. The graphics are simple but crisp. The game looks very professional and is well made - the creator has put attention to detail. Sound is simple but does the job nicely. My favorite entry so far, 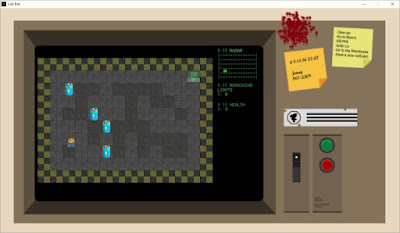 The game screen looks very cool, as you can see from the screenshot. The game graphics are quite simple as is the music. The concept is that you have a limited set of lights, and each light lasts for 5 seconds only, so you have to light up the maze - memorize it - then move around by radar to pick up more lights and ultimately find the exit. Not a bad concept, I just wish I could play it... I must admit I think this game has kind of a bug on my computer as the character moves around slowly as molasses - it takes 6 seconds to move from one square to the next which makes the game unplayable for me.
Also it is pretty easy to cheat using screen dumps ;-) 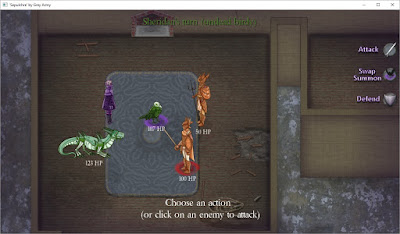 The menu screen looks great. The game is a kind of turn based tactical combat single character rpg where you are a necromancer that can summon two of three pets (with names like Undead Kitty Tiger) to help you during combat. You follow the quite well written story of a girl who comes home to a mansion trashed by intruders. Quickly you are thrown intol combat with some knights that claims your face is on wanted posters. Your summon minions that can attack, swap summon and defend. You can also throw some spells: heal, revive and buff. The first enemies die quickly..After the combat ends, you go to another room and another combat and so the game continues. I'm uncertain if there is a big difference between the different minions apart from different amount of health, making switching between them kind of pointless. The graphics look very good, maybe hand drawn, however there is some problems with z ordering a places (the bottles). The animations consists of the minimum amount of (good looking) frames. The combat music is cool but tends to end before the battle is over, maybe it should loop. The sound is good, but has some background noise at places, especially noticable when there is no music.
Lagt inn av Mr Koding kl. 12:36