KSEH - Doom in the Shadows 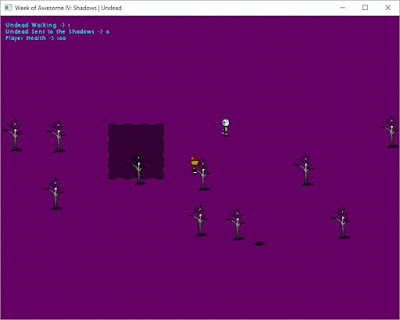 After three crashes and 'not responding' messages I was finally able to start the game. You point to click to walk around and shoot skeletons using shadow orbs, aiming with the mouse. Now and then a skeleton appears that you have to shoot. You have to charge each shot, so you have to fire twice to throw an orb, something I found a little annoying. If skeletons are too close they are impossible to shoot and you can only run. The music is very eerie and sets the mood. The graphics are very simple but gets away with it by looking retro. And after all It's no problem to see what's going on. The sound is very simple and if a skeleton attacks you a scratching sound is played over and over and that has to be damaging to the ears. When I died I could not restart the level but had to quit by closing the game entirely. New crashes and timeouts... 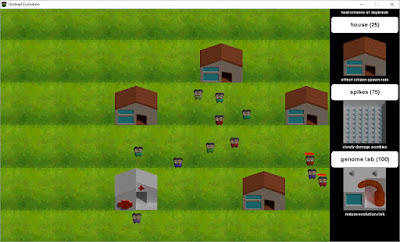 It is a kind of city builder game. You have to protect your citizens. You build buildings with different properties during the day, and watch zombies come for your citizens at night. You can build houses, clinics, spike traps and a genome lab. You can also upgrade each building. Citizens can evolve using the genome labs. You can also move the citizens around to avoid the zombies. The citizens have different properties. The controls are a little confusing. To cancel city building it is the right mouse button. To cancel citizen select it is the left as you move citizens with the left. I liked the day night cycle, and there is something there, but I just could not get the hang of it - maybe some more instructions would be in order - or at least some more mouseover help text for the different choices? The music is sufficiently eerie and sets the mood. The graphics are simple, especially the UI, but I like those little guys! 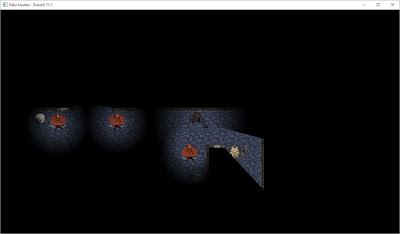 I died taking this screenshot. You search for artifacts in 5 different ruins. Sometimes you have to find different colored keys to get through the doors to the artifact. When you find the artifact, you have to escape the ruins. Sounds simple? One problem - in the ruins there is a monster that eats adventurers for breakfast and you have no weapon. If you hear steps you quickly have to turn off your light and hide or suffer the deadly consequences. The light effects are very good, so is the music, and so are the graphics (although there is no animation) and sounds. The levels are timed so you can play each level several times to beat your own high score. The artifact is placed at a different place every time so you can get lucky and get a very good time. I had fun playing this game. 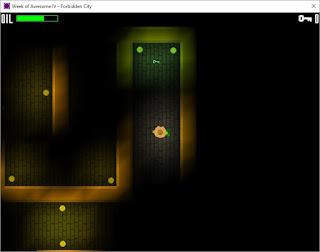 The menu screen looks very good. You walk around in a dark maze - not a city as the title would suggest. Your oil is running out, and if you are too long in the darkness you die. The goal is to escape. You can refill your oil by touching lamps. You can also light new lamps that you find in the darkness, improving your reach. Find a key, and find the door. I had a hard time finding the door at first, it looks too much like the regular walls. The instructions also come after level 1, when you have already learnt what is said, maybe they should have come earlier? Later in the level you have to avoid spikes, and you pick up some purple things I assume is coins? It seems I can pick up coins at several meters distance. If you die you respawn at the latest checkpoint. I like the level design and the light effect. The animation is simple but sufficient, so are the rest of the graphics. After initially having some problem playing sound that problem resolved itself after a computer restart - the music is very good and sets the mood, the sound effects are so-so, especially the footsteps could need some work. I think it is maybe a little too easy to die on spikes considering the small light radius and the slow movement - If I have to move even slower to watch for spikes it will take a very long time to clear levels... Also, I would prefer to move with WASD instead of the arrow keys... Old habits die hard. I was impressed that I got keyboard shortcuts in my native language! A good game with potential - I hope the author continues work on it!
Lagt inn av Mr Koding kl. 14:08